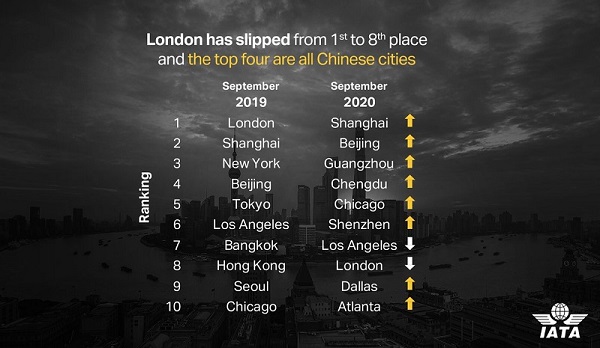 Shanghai has now replaced London as the world’s most connected city in the Air Connectivity index. Shanghai is served by 2 airports: Pudong International Airport and Hongqiao Airport. As international Air transport centers, there are regular and direct international flights between Shanghai and the top cities in the world.

Air transport is a major engine of the global economy. In normal times some 88 million jobs and $3.5 trillion in GDP are supported by aviation. More than half of this employment and economic value is at risk from the collapse in global air travel demand.

The change of Air connectivity

The International Air Transport Association(IATA)’s air connectivity index measures how well connected a country’s cities are to other cities around the world, which is critical for trade, tourism, investment and other economic flows. It is a composite measure reflecting the number of seats flown to the destinations served from a country’s major airports and the economic importance of those destinations.

Before the COVID-19 pandemic, the growth in air connectivity was a global success story. Over the last two decades the number of cities directly linked by air (city-pair connections) more than doubled while over the same period, air travel costs fell by around half.

London, the world’s number one most connected city in September 2019, has seen a 67% decline in connectivity. By September 2020, it had fallen to number eight. London has slipped from 1st to 8th place and the top four are all Chinese cities:

Shanghai is now the top ranked city in the world for connectivity with the top four most connected cities, including Shanghai, Beijing, Guangzhou and Chengdu.

The index of Air connectivity in 2020

The study reveals that cities with large numbers of domestic connections now dominate, showing the extent to which international connectivity has been shut down.

GWBMA provides professional company registration services for foreigners. We have a very strong relationship with Shanghai’s Comprehensive Development Zone and the Shanghai Municipal Commission of Commerce.

What to do When You Lose Passport in China

Enjoy a concert of French House music in Shanghai