Skip to content
Home / One Stop Service base in Shanghai / Being Together: Video of Support to Coronavirus Battle 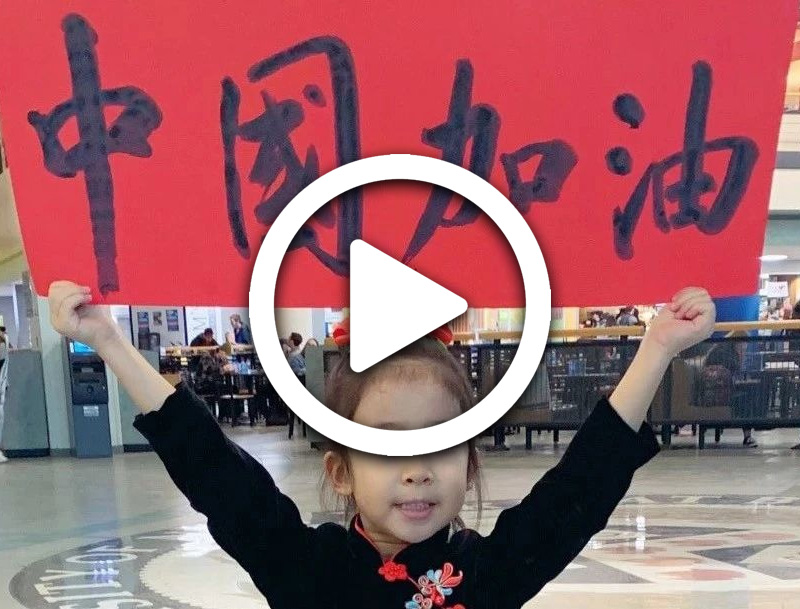 Created by Qinghua Chen, a native of China and a graduate student at State University of New York at Buffalo, this video is presented as a personal gesture of support to people who are battling the coronavirus in China and around the world, as the coronavirus is a global challenge. The video delivers three key messages. Heartfelt thanks is first of all extended for all the efforts and hard work, which has been committed by the medical staff and people of other occupations. In the second think-about-you part, participants wish everyone safe, well and strong.

Encouragement is given in the end through “Jiayou”, the Chinese term that means “Keep Going” or “Keep Fighting”.

On the two slogan boards, the calligraphic Chinese characters bear the meaning of “Jiayou Wuhan” and “Jiayou China”. They were written by Bingling Zhu who is a friend of Chen. Participants, from China, the US and other countries, lift up the boards and said Jiayou in Chinese in particular to express their support and compassion.

When facing the global battle against the coronavirus, no one is alone. In the fight, together we stand and together we will win.

We look forward to the future, supportive, positive and confident.

The video was filmed in late February when China experienced its most difficult time during the coronavirus battle. As the video planner and director, Chen wished to cheer up the spirit of her families, friends and country fellows in China. The filming took place in the westernmost region of the New York state. A total of over 140 participants of different nationalities gave their wishes and messages. The majority are the university teachers, faculties and  students and families in the local communities.

About 20 children participated in the video too. Coming from local Chinese and American families, they drew pictures of the map and flag of China, wrote Jiayou China or Jiayou Wuhan in Chinese and delivered their wishes verbally.

Chen received immediate support to her video idea from two people in the university, Dr. Julie Gorlewski who is the chair of the Learning and Instruction department where Chen studies and Dr. Claire Cameron who is Chen’s doctoral mentor. They both participated in the video.

Written permission is secured through consent forms signed both online and on the site of video shooting. To keep the video as a personal gesture of compassion, there is no official affiliations or personal information stated. All the participants are listed alphabetically by last name at the end of the video.

Wishes to the world

While the coronavirus is now spreading in other countries around the world, the video participants wish that everyone would stay well.

Qinghua Chen is a PhD student at State University of New York at Buffalo, and a Presidential Fellow of three consecutive years at the university. She holds a Master’s degree in International Journalism and a Master of Education. Chen has a journalist background and before she moved to study in the US, Chen worked for globally renowned brands in fashion and beauty industries in China.

Guidelines for return to work and wage payment After Novel Coronavirus